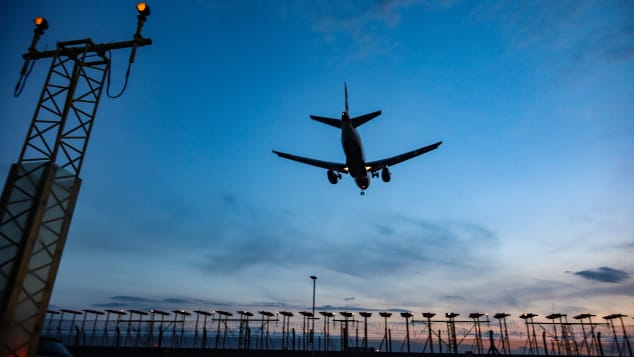 Credits : At London's Heathrow, British Airways is using AI in a trial of autonomous robots meant to help with a slew of operational practices. Nicolas Economou/NurPhoto via Getty Images

(CNN) - Whether it's biometrics to get through security, an airline app that tells you if your flight is delayed or free Wi-Fi and charging areas for all travelers, there's no doubt technology this past decade has helped enhance the airport experience for fliers around the world.

How exactly will it continue to make a difference in the 10 years to come?

The future is nigh

According to Sherry Stein-Technology Headd for SITA, a technology company providing IT and telecommunication services to the air transport industry,"Technology is going to play a much bigger role at airports than it ever has in the past and will be the key driver in creating every facet of a seamless travel journey" .

Nina Brooks, director of security, facilitation and airport IT for Airports Council International, the trade association for the world's airports, agrees and adds that technological innovations today are especially critical to how an airport runs because the number of global passengers is expected to more than double by 2040.

She mentioned, "Airports setting, that involve so many different parties including airport and airline employees, security personnel, national aviation authorities and outside vendors". "Adopting new technology helps them to operate more efficiently and sustainably."

A SNEAK PEEK OF WHAT FLIERS CAN EXPECT AT AIRPORTS ON THE TECHNOLOGY FRONT BETWEEN 2020 AND 2030. 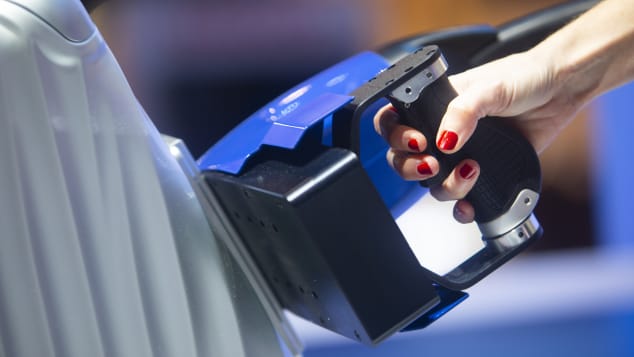 Technology that verifies a passenger's identity through fingerprints, for example, is being tested at airports all over the world. Courtesy of Delta Airlines

As of today, according to Brooks, around a few hundred airports all over the world are testing out biometric identification, a technology that verifies a flier's identity through fingerprints or facial features and speeds them through an aspect of their journey such as security or boarding.

Going forward, however, the use of biometrics will grow exponentially, she says. "More and more airports and airlines are collaborating to try out the technology for the first time or are expanding the programs they already have in place."

Singapore's Changi Airport, for example, recently started a trial in Terminal 4 which allows Singaporeans to walk through arrival immigration without showing their passports or scanning their thumbs. Instead, they can clear immigration by going through an automated lane where they're identified through an iris scan or face capture.

On the airline side, British Airways has just installed biometric boarding for all domestic flights out of Heathrow Terminal 5.

For international flights, Raoul Cooper, British Airways' Senior Digital Design Manager, says that self-service boarding gates have now been installed at the terminal, allowing customers to scan their own boarding cards to get on their flight. According to him, "This is the first step towards biometric boarding on international flights from the UK,".

Biometrics is also a big focus for American Airlines this decade, according to spokesman Ross Feinstein. He stated ,"They are already testing biometric boarding at some airports for international departures,". Feinstein expects that biometrics will continue to be expanded throughout the next decade, to include the check-in process, security checkpoint and domestic boarding.

Director of Aviation Huntley Lawrence mentioned that, "They are currently building areas in all three airports where we can roll out more biometrics that customers can use in every part of their journey". "By the end of this decade, it will be the exception for us to not offer the technology everywhere."

As biometrics becomes more prevalent, passengers may be even able to use it to shop duty-free, predicts Henry Harteveldt, a travel industry analyst and founder of Atmosphere Research Group. According to him, "It's going to take over the airport".

Artificial intelligence, referred to as AI, is nascent at airports compared with biometrics, but this will soon change.

According to Brooks, "As airports get busier, airports, airlines and security organizations will collaborate to increasingly rely on AI to stay secure, efficient and proactive" .

The Port Authority of New York and New Jersey, for one, is investing in luggage screening equipment for both check-in and carry-on bags that uses AI technology. Port Authority's executive director, Rick Cotton, says that this equipment has the capability to identify any concerning bags, quickly deliver them to a TSA agent for additional screening and then back to the aircraft or passengers.

"This is top of the line detection technology that's going to make security screening a more rapid process," he mentioned. The equipment is expected to debut in LGA by the middle of this year and in other area airports by 2025.

British Airways is using AI in a trial of autonomous robots that's beginning this year at Heathrow Terminal 5. These robots, from technology company BotsAndUs, can interact with passengers in multiple languages and have the ability to answer thousands of questions including those related to real-time flight information. And, thanks to geo-location technology, they can even move around the terminal and walk customers to areas such as the Special Assistance desk.

In a press release, Ricardo Vidal, British Airways' Head of Innovation, stated that the robots will free up the airline's employees to deal with more time-sensitive issues.

While passengers are sure to notice robots, AI will also be used at airports this decade in ways that they may not pick up on, according to Stein, of SITA.

"Airlines and airports will turn to AI to increase their operational excellence" . "Escalators, for example, will be equipped with sensors that sound an alarm if they stop working that's heard only by the airport's operations center."

In a real-life case, Delta Air Lines is creating an AI-reliant machine that analyzes millions of operational data points from aircraft positions to airport conditions. The machine, to be introduced this spring, uses these points to create hypothetical outcomes that give employees the information they need to make decisions when flights are disrupted.

If there's a severe snowstorm or power outage, for example, employees will be able to decide, based on data from the machine, how to best rebook passengers and which routes are best for whom. 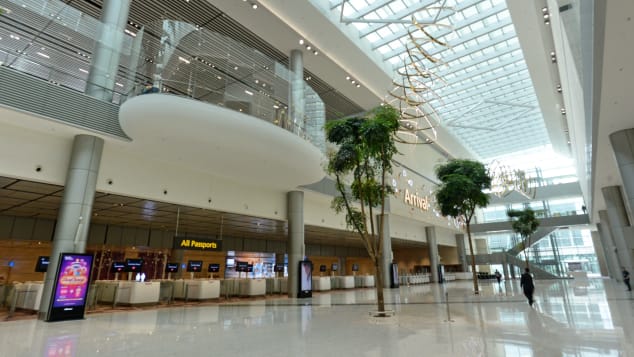 Internationally, the Singapore Tourism Board (STB) has partnered with the Immigration & Checkpoints Authority to introduce the SG Arrival Card within the Visit Singapore app, (this app helps visitors navigate the destination). AFP Contributor/AFP/AFP/Getty Images

Airport and airline apps are far from new, but from 2020 to 2030, they'll become far more sophisticated, according to both Stein and Brooks.

"These apps include ones for fliers and ones for all the parties involved in running an airport from security personnel to airline employees," According to Brooks.

Passenger airport apps, for example, will increasingly have information on weather, air traffic, gate information, parking and current security wait times. Some will even be equipped with geographical information systems (GIS) that give fliers maps to what they're looking for including the nearest coffee shop or their departure gate.

The New York Port Authority has plans to amp up its passenger app over the next few years. "Fliers will be able to see the security wait times at each check point and taxi wait times," says Cotton, the executive director. "You're also going to be able to order food and retail through the app and have it delivered to your gate."

Internationally, the Singapore Tourism Board (STB) has partnered with the Immigration and Checkpoints Authority to introduce the SG Arrival Card within the Visit Singapore app, (this app helps visitors navigate the destination).

As of January 17, visitors can submit their disembarkation/embarkation cards electronically through the app up to 14 days in advance of their arrival in Singapore.

On the airline front, Delta wants to make its app a digital concierge.

According to spokeswoman Kate Modolo, "Their goal is to have the app manage all aspects of your journey". She Included that, "They want traveller to be able to use it to order a Lyft (Delta has a partnership with the ride-share service), use miles to pay for their ride, check into hotel room and have key waiting for traveller when they arrive".

American Airlines, too, wants to expand the functionality of its app to make it more self-serving, according to spokesman Feinstein.

"At the end of 2019, we started using the AA app to inform customers if their flight is oversold and give them the option to volunteer to change their flight in exchange for a travel voucher," he says. "We increasingly want them to rely on the app to rebook their flights and handle any of their other needs with us." 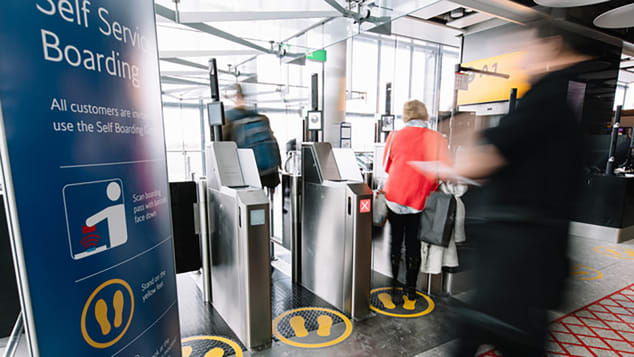 Facial recogniion technology is gearing up to be a major force in airport advancement around the world in the coming decade. Courtesy Stuart Bailey

From an operational point of view, a variety of technological innovations will come to fruition at airports in the following 10 years.

Many are happening behind the scenes. At Port Authority airports, for example, Cotton says that the existing security cameras in terminals will be replaced with high-resolution models. All of LGA and Terminal 1 at Newark will have these high-res cameras by 2022, and they'll be in JFK by 2025.

Port Authority is also investing more than $25 million in improving the Ground-Based Augmentation System at LGA and JFK. This system guides an aircraft to the runway during bad weather and has technology that shows planes multiple paths to landing as opposed to a single path.

These upgrades may not make a huge impact on fliers, but Delta's foray into parallel reality is another story.

Partly relying on multi-view pixels, this technology personalizes the content fliers see on airport screens to their profile and journey; the airline is testing it on 100 customers later this year at Detroit Metropolitan Airport. "Imagine two fliers looking at the same airport screen at the same time and each seeing different messages in their preferred language," mentioned Modolo. "That's what parallel reality is."

These personalized messages vary but may include updates on flight times and boarding, the location of the nearest Delta Sky Club and even a flier's upgrade/ standby status. (Fliers opt-in to use the technology when they check-in for their flight.)

In other areas, Stein and Brooks mentioned that, more and more ground service equipment at airports will be automated including ramps, jet bridges and cargo and baggage loading trucks.

According to Brooks, "The more automated equipment there is, the fewer employees you'll see". "Some fliers may miss the human aspect, but the overall benefits that technology gives them when they fly is worth it."