The robot shop worker controlled by a faraway human

A robot is a machine-especially one programmable by a computer- capable of carrying out a complex series of actions automatically. Robots can be guided by an external control device or the control may be embedded within. Robots may be constructed on the lines of human form, but most robots are machines designed to perform a task with no regard to their aesthetics.(Source-wikipedia) 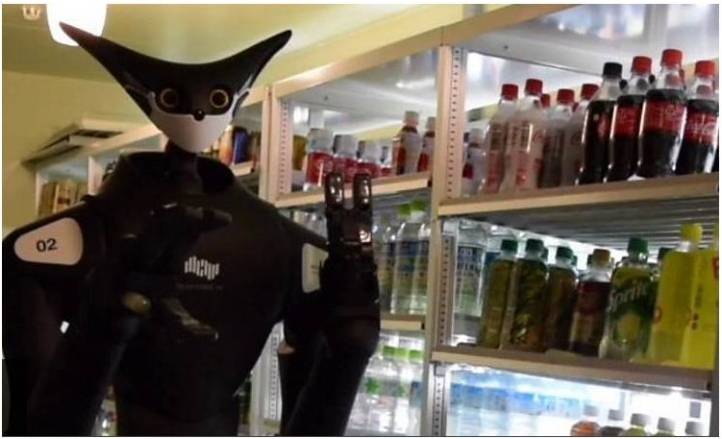 In a quiet aisle of a small supermarket in Tokyo, a robot dutifully goes about its work. Reaching down, it grabs yet another bottle of a flavoured drink that humans like, lifts it and places it on the shelf of a refrigerated unit. Then the next one. People come and go.

It looks like a well-integrated autonomous mechanical worker, but that is something of an illusion. This robot doesn't have a mind of its own. Several miles away, a human worker is controlling its every movement remotely and watching via a virtual reality (VR) headset that provides a robot's eye view.

This is the work of Japanese firm Telexistence, whose Model-T robot is designed to allow people to do physical labour in supermarkets and other locations from the comfort of their own homes.

In this case, the robot is working at a FamilyMart shop in Tokyo. Eventually, it will handle more than just drinks bottles - rice balls, bento boxes and sandwiches should all be within its grasp.

The Model-T is a "human avatar" according to Yuichiro Hikosaka, board director at Telexistence. 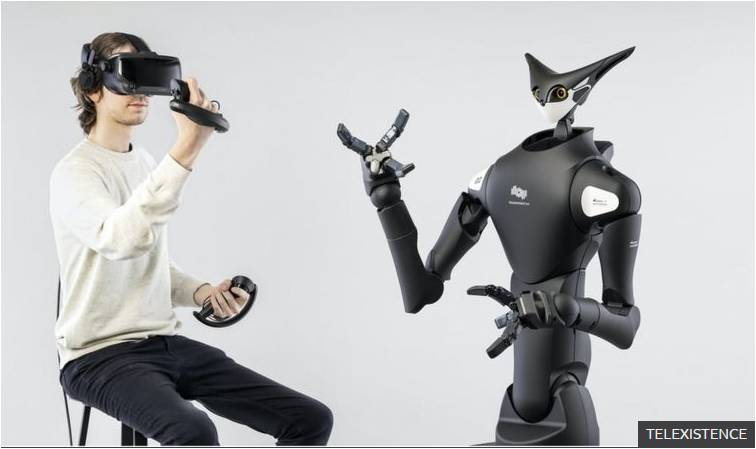 One human could control several robots in different locations - source:www.bbc.com


"You can go anywhere without moving yourself," according to Hikosaka. The concept is called telerobotics or teleoperation, and it has been dramatized in dystopian sci-fi films such as Surrogates and Sleep Dealer.

Remote-controlled bomb disposal robots have been around for decades but teleoperated devices are now doing more than ever before - including delivering food to people's homes in the Covid-19 era.

Mr Hikosaka points out that Japan, with its ageing population, is currently facing a labour shortage - particularly with regard to low-income jobs. He argues that this could be partly solved through deploying thousands of robots in locations where physical work occasionally needs to be carried out, and allowing companies to remote-hire people in order to operate the robot when needed.

"It's maybe a ten-minute job," according to Hikosaka. "First of all, work in Tokyo but then ten minutes later you can work in Hokkaido."

Workers would log on to an online marketplace, choose tasks they want to do and then don their VR headset to transport themselves, virtually, to work. The idea may be especially appealing right now, suggests Mr Hikosaka, because workers don't have to come in to physical contact with other people - reducing their risk of catching or spreading Covid-19.

There are snags the firm has yet to overcome, though. For one thing, the Model-T doesn't move nearly as quickly as a human supermarket worker. And the VR headset can cause dizziness or nausea for people especially if they wear it for prolonged periods. Mr Hikosaka and his colleagues are working on solutions to these problems.

But, really, the main hurdle is getting supermarkets to buy in to the technology at scale, which is necessary to reduce the cost of manufacturing each robot. Mr Hikosaka doesn't hide his firm's ambitions. He notes that there are tens of thousands of small supermarket shops scattered around Japan, most of which are owned by one of three companies.

A deal with just one of these firms to supply thousands of branches could catapult Telexistence's technology into the mainstream. "If they like it, boom," according to Mr Hikosaka.

The hype may not be shared by everyone, however. Carl Frey, who directs the Future of Work programme at the Oxford Martin School, mentioned he struggles to see the benefit of teleoperated robots in most scenarios.

And when it comes to handling and moving objects in shops or warehouses, according to him, robots are a very long way from matching human skills.

"The reason for that is that robotic hands are not as dextrous as human hands," he explains. "We can pick up just about any object and manipulate it.

"We know what pressure to apply, how not to break objects and so on."

Telexistence's robots can be fitted with pressure sensors and suction devices, notes Mr Hikosaka, but time will tell if the three-fingered hands on the Model-T are reliable enough for daily work in the real world.

The costs of paying humans to operate robots may make them less attractive prospects for most businesses in the short term, according to Dr Frey.

In the longer term, he adds, autonomous robots could make such technology redundant and threaten swathes of jobs currently done by humans.

In one much-discussed 2013 paper, he and a colleague estimated that 47% of US jobs could be lost to automation. 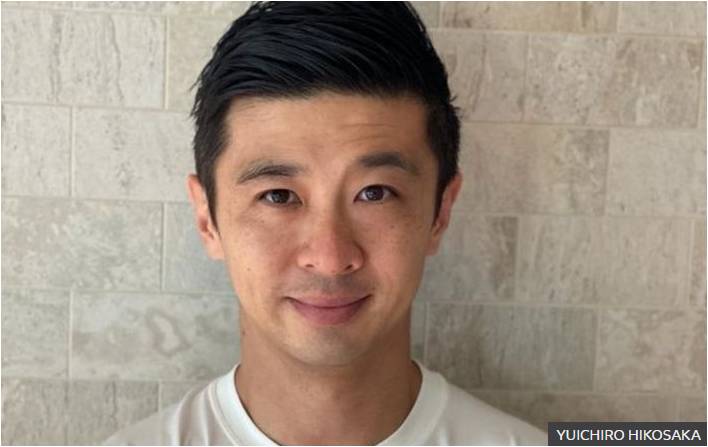 
At present, Mr Hikosaka says Telexistence wants to land somewhere in between, with the Model-T robots gradually becoming partially automated but still controlled at a high level by human beings. Instead of deftly managing every movement of the robot, for instance, a human operator might simply select the next item to be picked up and moved - the Model-T would then do those steps automatically.

The robots could be trained to do this, Mr Hikosaka suggests, after they have spent years gathering data on how humans carefully manipulate the robotic hands in order to get a good grip on specific objects. In a way, workers would be training the devices that might partially replace them in the future.

Ultimately, teleoperated devices will likely lead to greater levels of automation and fewer jobs being available for human workers in certain low-paid industries, according to Dr Frey.

It's true that the list of jobs that were once manual but which are now done by machines with just a small amount of human oversight, or none at all, grows ever longer.

"That's when you cut out the workers."