The Samsung Group is a South Korean multinational conglomerate headquartered in Samsung Town, Seoul. It comprises numerous affiliated businesses, most of them united under the Samsung brand, and is the largest South Korean chaebol. (Source: Wikipedia) 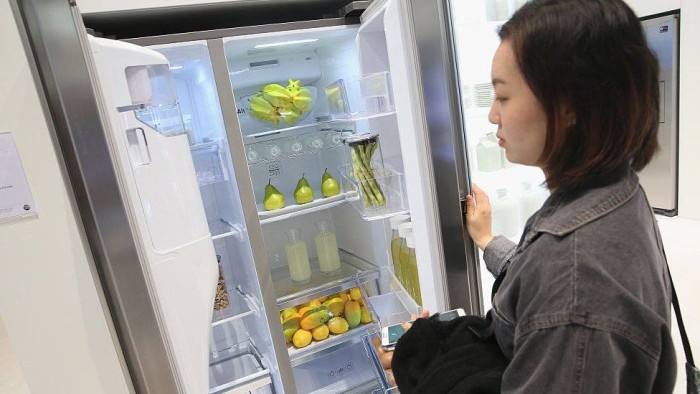 The South Korean giant saw a big spike in sales of fridges and cleaners during the pandemic while online sales grew 50% globally during the third quarter.

One area of growth in South Korea were fridges that can be customised according to size, material and colour.

Samsung plans to start selling personalised fridges in the US, Middle East and Europe later this year.

Specialty fridges for kimchi (fermented cabbage) are a popular option and accounted for more than 67% of the South Korean market last year.

According to Jaeseung Lee, Samsung's president and head of digital appliances business, "Customers had few options among products made by a traditional manufacturing system".

"Their way of manufacturing has to be changed for the personalisation of appliances. And that's a big transition."

Samsung, which also offers bespoke wine coolers and dishwashers, wants to include suppliers and furniture studios in its manufacturing process to come up with more design options.

Samsung is one of a few companies offering bespoke electronics, having started with its "The Frame" television which allows consumers to choose their own bezel frame.

Most people including millennials usually like personalised products. From small items like wallets, to high-end bicycles to cars, companies have tried to monetised this, by providing some customisation to generate a bigger margin.

By customising an item, it allows the consumer to feel that their item is more unique and closer to their hearts.

The electronics firm is also putting more software in its appliances such as artificial intelligence (AI). While Samsung has its own Bixby voice assistant, According to Mr Lee, it is open to working with rivals Amazon and Google to connect their systems to its gadgets.

Big electronic companies have benefitted during the pandemic as more people worked from home and relied on gadgets and the internet in their daily lives.

Many of these brands will be showcasing their new technology at a digital version of the Consumer Electronics Show this week.

The tech event, which is normally staged in the US gaming resort of Las Vegas, kicked off on Monday. Samsung showed off its Bot Handy, a robotic waiter and butler that can pour you wine and do the washing up.