Mindfulness meditation apps claim to ease anxiety and stress but are they worth trying?

Mindfulness is the basic human ability to be fully present, aware of where we are and what we're doing, and not overly reactive or overwhelmed by what's going on around us. The goal of mindfulness is to wake up to the inner workings of our mental, emotional, and physical processes. Mindfulness is available to us in every moment, whether through meditations and body scans, or mindful moment practices like taking time to pause and breathe when the phone rings instead of rushing to answer it. (Source: mindful.org) 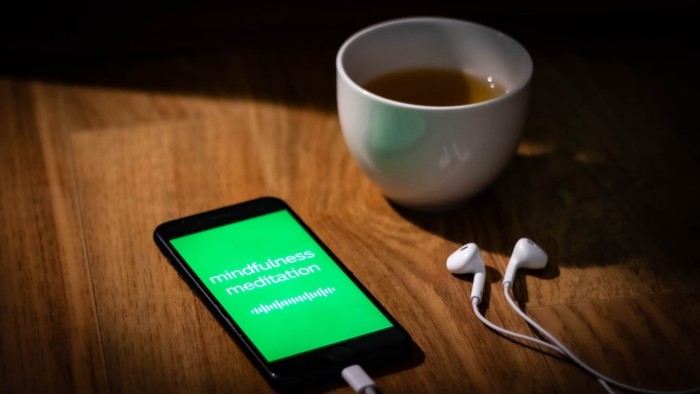 If the pandemic has pushed you to breaking point, you're not alone. To cope, you may have considered using - or have already used - mindfulness meditation to instil some peace into your day-to-day life.

According to Dr Addie Wootten, clinical psychologist and CEO of the not-for-profit Smiling Mind app- Mindfulness is "learning how to be present to be within the moment.

She is of the opinion that mindfulness is about "being open, being curious, … being able to sit with difficulty, being kind to ourselves".

Meditation, from her perspective, is a way to cultivate that sense of mindfulness, to build our capability to be more mindful.

But not everyone can go to a meditation class, especially right now, so guided meditation apps have become big business.

The most popular, Calm, has been downloaded more than 100 million times and is valued at more than $2 billion.

Yet, as accessible as they seem, the apps are not without issues.

Paul Barclay from ABC RN's Big Ideas sat down with a panel of experts to discuss the efficacy of mindfulness meditation apps - and whether the pros outweigh the cons.

Dr Elise Bialylew, who trained in psychiatry before founding the Mindful in May website, is of the opinion that much of the advertising for mindfulness meditation is misleading.

According to her, The way it's promoted is come and get some headspace, get some calm. But, also, the practice of meditation is "not an easy road" and often opens up very uncomfortable feelings.

She had mentioned, "Pema Chödrön, the American Buddhist has the term 'discomfort resilience' … the ability to actually stay in the here and now with what might not feel good".

Many people will come and then they sit down for the first two minutes and it feels awful, and their mind is going crazy, and they might conclude, 'I'm rubbish at this … this isn't for me.

According to Dr Bialylew, the better apps will explain to people that this doesn't mean they are failing, but that "that's actually part of it - our minds are crazy".

She is of the opinion, the industry needs a PR overhaul but worries that "it just wouldn't sell if you put the signs up saying, 'Come here and you're going to be in agitation and boredom, but it's for a good cause.'

But he disagrees with Dr Bialylew when she says talking about the difficulties of meditation would make it hard to sell. "The Buddha was like, 'there is suffering' and stuff, and he was reasonably successful," according to Sujato.

While high-resolution brain imaging has revealed that some mindfulness meditation regimes may reshape the brain in a beneficial way, the science is still in its early days.

According to Psychologist Dr Nicholas Van Dam, director of Melbourne University's Contemplative Studies Centre, testing the efficacy of mindfulness meditation has proved to be difficult.

Unlike testing a pill, where participants in a clinical trial take either a medication or a placebo, meditation introduces many other variables.

Someone who meditates may also be watching their breathing, thinking positive thoughts and removing themselves from digital distractions or the demands of work or parenting.

"The tricky part in designing these studies," according to Dr Van Dam, "is how do we control for all of the other stuff that you're doing when you're meditating?"

Dr Van Dam is of the opinion, that this doesn't mean scientifically assessing mindfulness meditation is impossible - it's just hard and many past studies haven't been done well.

But according to Sujato using mindfulness meditation only for what is scientifically provable is limiting its potential. Seeing meditation simply as a tool for reducing stress and predetermines the result. Whereas, as part of a spiritual path, it's much more open.

"It's much more like: How do I find freedom? How do I become a better person? How do I grow and fulfil my potential? These are much broader, much harder qualities to define and, of course, qualities that are even harder to measure in the laboratory.

According to Sujato, his concern is not with mindfulness meditation being co-opted - in fact he is of the opinion that Buddhists copied the concept of mindfulness from the Jains and the Hindus. Everyone borrows from everyone else," according to him. "If there's something in Buddhism which is useful for people, that's great."

His concern is that it is being co-opted to satisfy only that which can be scientifically proven and the idea that mindfulness is defined by a desire for wellness, a desire for stress relief, a desire for ease, and so on - this is very much a modern innovation. If you went along to the Buddha and said, 'Look, I'm going to die, I feel sick, I'm really stressed,' the Buddha would say, 'Yeah, that's how life is, suck it up.' "He wouldn't say, 'Have this mindful app and make it go away.'"

Can apps help you deal with distraction?

According to Dr Bialylew, a potential downfall of meditation apps is that they are on your phone, along with all the distractions that await there.

According to her,"You're doing your meditation on your phone, and then it's very easy to just fall over to Facebook and start scrolling".

But, she is of the opinion, that you could equally go to an in-person meditation session and then pick up your phone as soon as you walk out the door. We are creatures that have these devices on us all the time.

Dr Bialylew also mentioned, that meditation apps can help people develop a strong mindfulness practice and help them train their minds to be more focused and aware. This can in turn enable people to "catch themselves when they are falling into the digital wormhole".

If you have a strong mindfulness practice … you can actually become a lot more empowered to create the boundaries for yourself in your relationship with technology.

Dr Van Dam agrees,and mentioned well-designed apps aim to help you deal better with distractions around you. The goal of these practices is not to be present, focused, attentive and calm in a quiet, peaceful setting.

Rather, he is of the opinion, the aim is to be able to use the skills you gain through meditation in your day-to-day life. "If you're not doing that, then what's the point of it, right?"