An airbag is a vehicle occupant-restraint system using a bag designed to inflate extremely quickly, then quickly deflate during a collision. It consists of the airbag cushion, a flexible fabric bag, an inflation module, and an impact sensor. The purpose of the airbag is to provide a vehicle occupant with a soft cushioning and restraint during a collision. It can reduce injuries between the flailing occupant and the interior of the vehicle. (Source: Wikipedia) 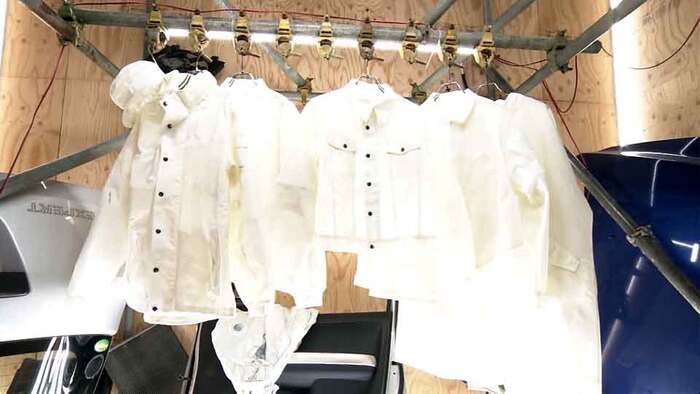 More than 3 million vehicles go to the wrecking yard each year in Japan, and most of their components will be reused or recycled. But there's one part that rarely gets used again: the airbag. That's starting to change now that some creative minds are giving the material a second life.

Fashion designer Heron Preston made his name collaborating with the likes of Nike, Gap and Kanye West, but his latest alliance was his most unusual. He worked with Mercedes-Benz to create a fashion line from leftover airbags.

The German automaker handed Preston used airbags from crash tests, and he refashioned them into concept couture that was exhibited recently in Tokyo's Roppongi district.

The clothing mimics the functionality of the airbag by inflating and deflating. 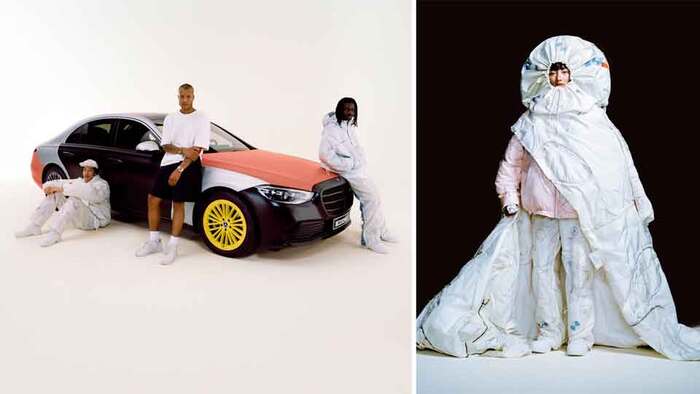 According to Mercedes-Benz Japan spokesperson Tamizane Hiroki, that the idea came from discussions about sustainability and how to reuse or upcycle something they usually throw away.

Couture from the wrecking yard

The German automaker isn't the only company to see the fashion potential of the airbag. Automobile recycling firm Nishikawa Shokai wanted to spotlight the practicality of a material designed to withstand extreme impact and heat, and asked avant-garde fashion designer Kawanishi Ryohei to help.

According to Kawanishi, the most challenging part of the project was having to work around the size and shape of the bags. Only a small amount of fabric can be salvaged from one airbag, so it takes around ten of them just to produce one jacket.

On top of that, stitching all the pieces together takes longer than cutting from the larger strips of fabric Kawanishi is used to dealing with. According to the designer, it posed a significant challenge, since they want this to be more than just a concept range.

The process not just of creating clothes, but also figuring out how to produce them in quantity and commercialize them was really challenging.

Kawanishi eventually found a garment factory that was prepared to put in the long hours and intensive labor to get the job done. He produced nine designs, including a jacket, pants, hat and a bag. The sturdy fabric, conspicuous stitching and patchwork patterns are all part of the charm.

Kawanishi uses the serial numbers printed on the airbags in the design. And the prices-around $200 for a jacket-are far lower than his pieces usually sell for.

Both the designer and the wrecking firm hail from Tottori Prefecture, and they decided to keep things local with the launch, debuting in a Tottori City clothing store last month. As soon as the store opened, it was crowded with buyers.

One customer, Yasui Daisuke, ordered several items. According to him, "the design featuring serial numbers is cool". "The patchwork pattern is different in each piece, so he can't wait to see how it turns out."

According to Nishikawa Shokai, working with people from a different industry gave them a new perspective on something they used to throw away, and they plan to keep searching for new ways to turn that trash into treasure.