Cognitive Lrn-Shr provides Self Learning Material in India. Elearning Discussion Park is one of the communication tools to acknowledge ideas & more

What is next after blockchain technology? There is another new technology called Holochain. Holochain is a rival internet protocol that enables its users to regain their online privacy. It is a distributed hash table system (DHT) which harnesses the parallelism of Bit Torrent to distributed apps. ( Bit Torrent is a communication protocol for peer-to-peer (P2P) file sharing which is used to distribute data and electronic files over the Internet.)

A team comprising cofounders Arthur Brock , Eric Harris Braun developed holochain technology. It is designed to run entirely on distributed networks of home computers, smartphones on a P2P (peer to peer) or on a give and take basis. According to the team, the aim of holochain is to create decentralized web. Developers can create decentralized applications that have infinite scaling capacity through P2P networking. Holochain technology functions are completely managed and controlled by users. Precisely it is an agent centric architecture where entire system is fueled by each user or a host who uses technology.

How different Holochain is from blockchain?

You need to put garment into a slot at the top of the machine. After making its way through the machine innards, folded garment returns in a stack through a window at the bottom of the machine within a fraction of seconds.

- Decentralization with no bottlenecks and adaptable validation
- No centralized servers, no ledgers, and no middlemen
- Individual authority over data sharing, access, and storage
- App framework does not pose any limit of transactions per second 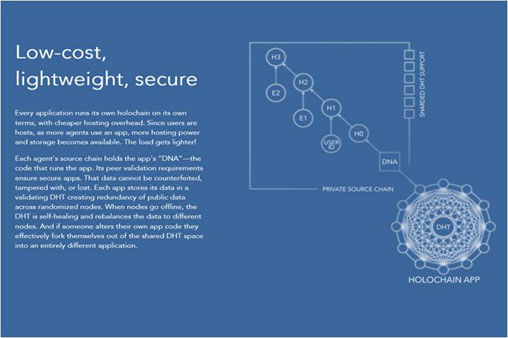 As per the whitepaper, Holochain allows nodes to act independently, or in tight coordination only with counterparties, and then share independently evolving data realities that agree over time. All kinds of apps can be built on holochain. For example, search apps similar to Google, email apps, messaging apps similar to Facebook Messenger, Twitter-like short text sharing apps, AirBnB-like spare-room-sharing apps.